How is everyone doing with the lingering summer heat?

One particular statue that will be sure to cool you down is now open for pre-order! 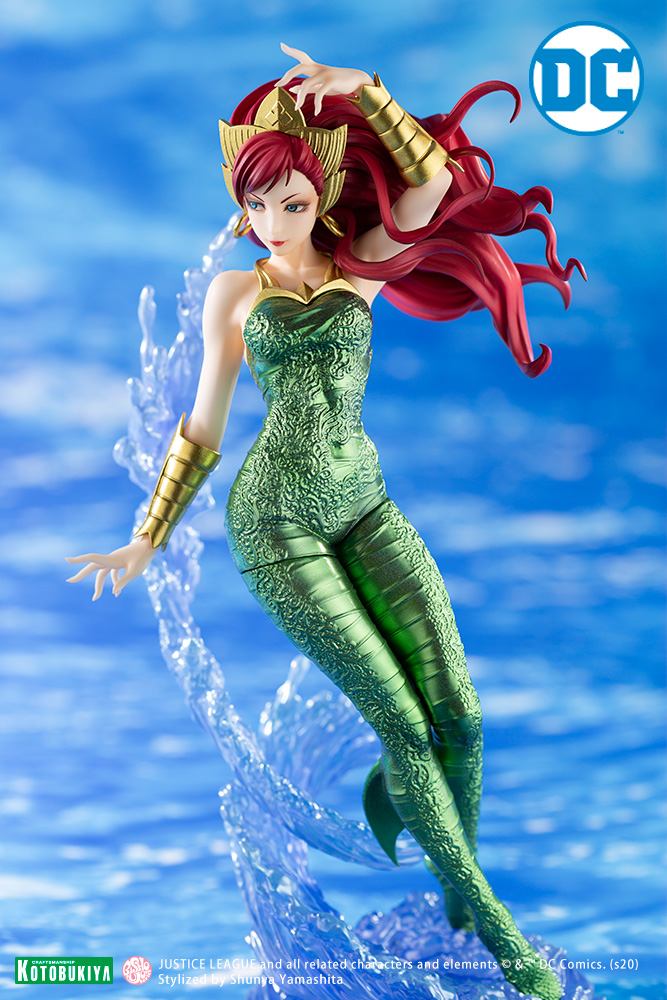 Doesn’t she just look so cool!? 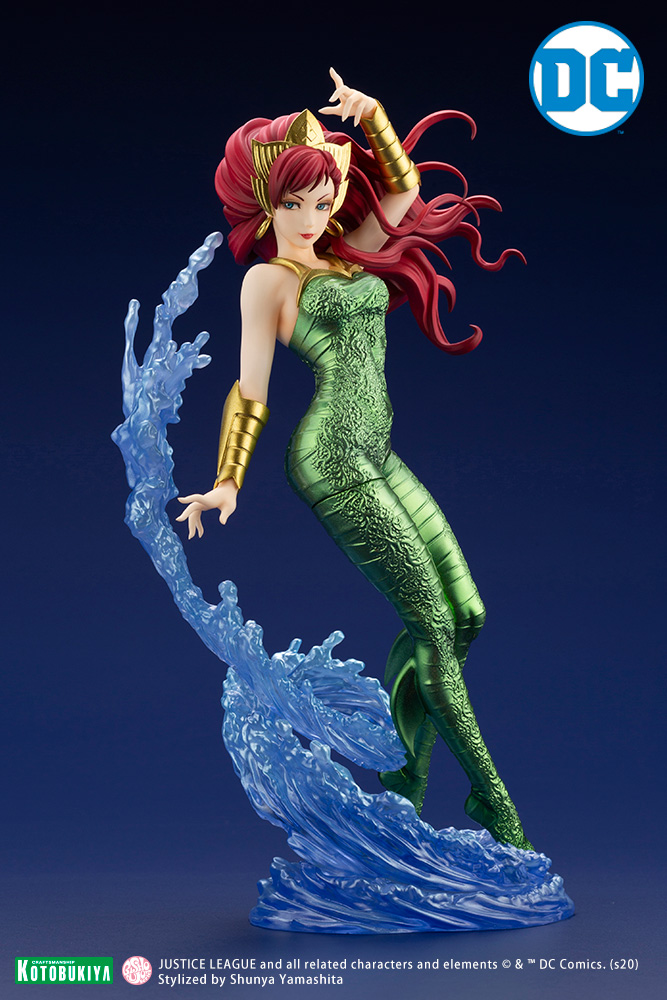 Mera is the beautiful and noble queen of Atlantis who fell in love with Aquaman!

With her appearance in the live-action film, this character has risen in popularity like never before!

In one revamp of Mera’s history, she was sent to kill Aquaman but instead ended up falling in love with him.

When I first read this particular story, I thought of it as a tragedy with a hint of romance and had some essences that reminded me of The Little Mermaid.

*This rendition of Mera may be from this universe… Or another universe… I leave that up to your interpretation! 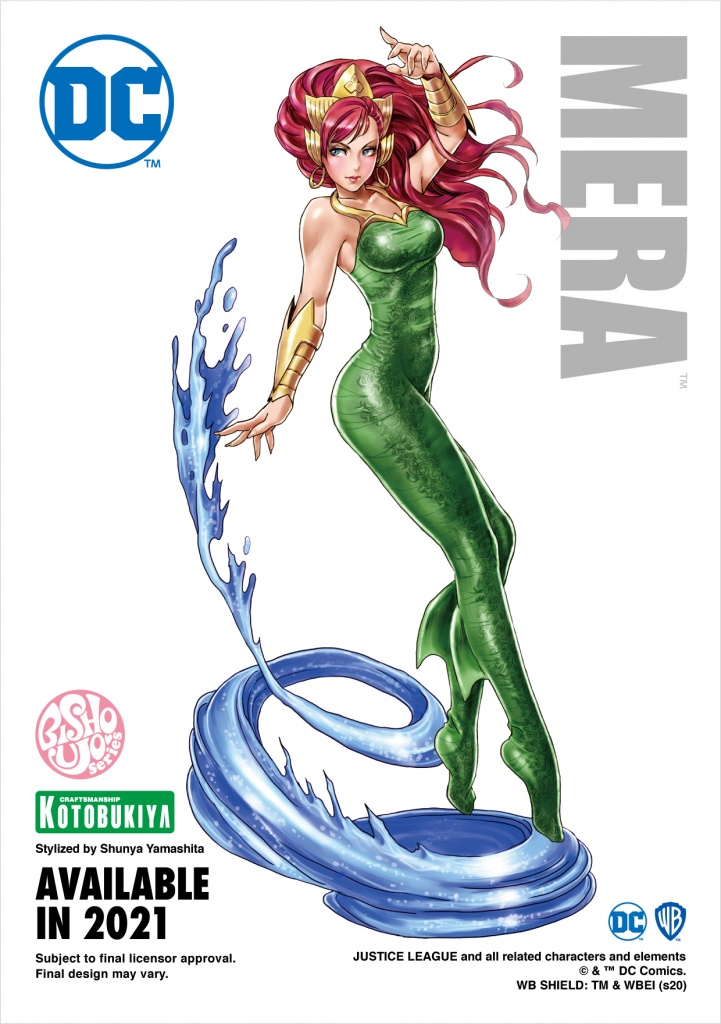 And this is the original illustration by Shunya Yamashita （@ShunyaYamashita）!

Look at the beautiful silhouette, the locks of hair as they flow about in the wind, and the shimmering water effects! 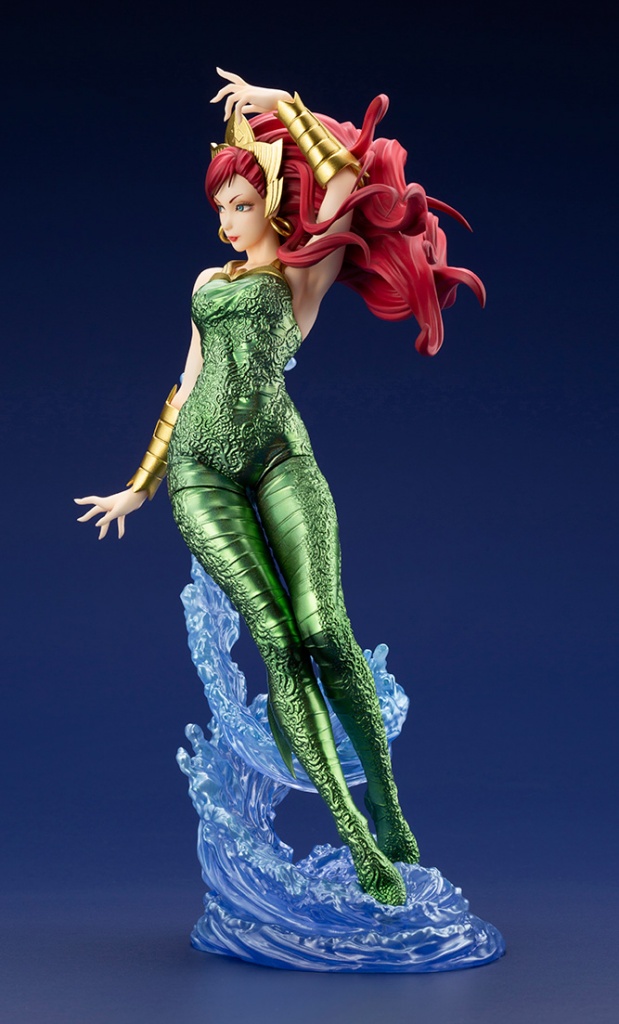 We sculpted and painted Mera to resemble a mermaid queen come to life, so we paid close attention to bringing the elements of the ocean into the design of this statue.

The pose captures Mera as she naturally swims and controls the waters around her. 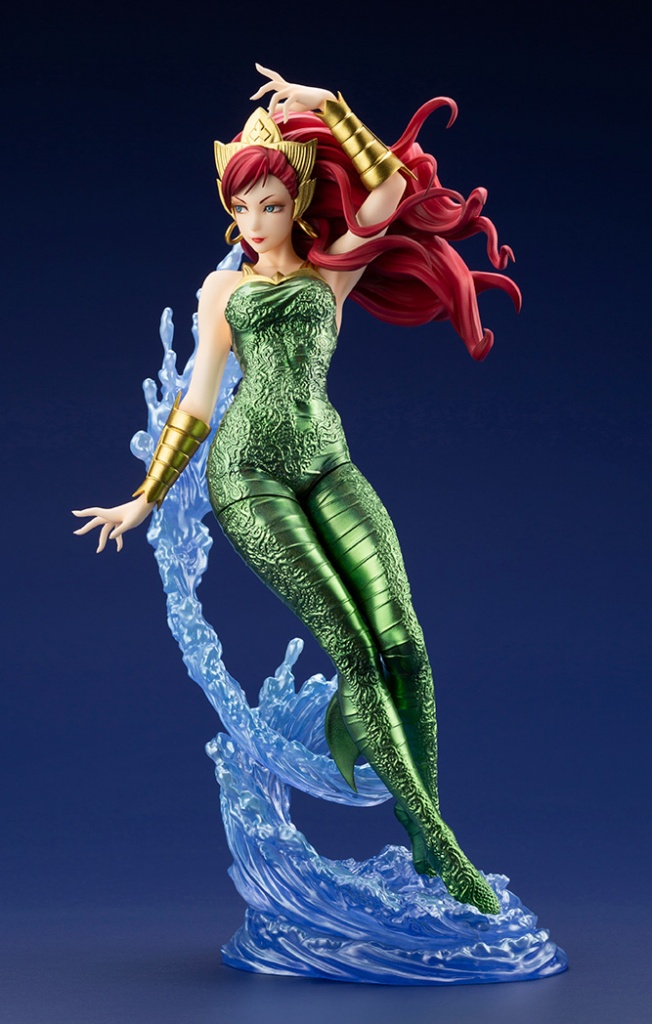 To truly make her resemble a mermaid, this statue has been sculpted with her thighs and toes close together to make her lower half almost look like fins.

Squint your eyes and you might be able to see the silhouette of a mermaid! 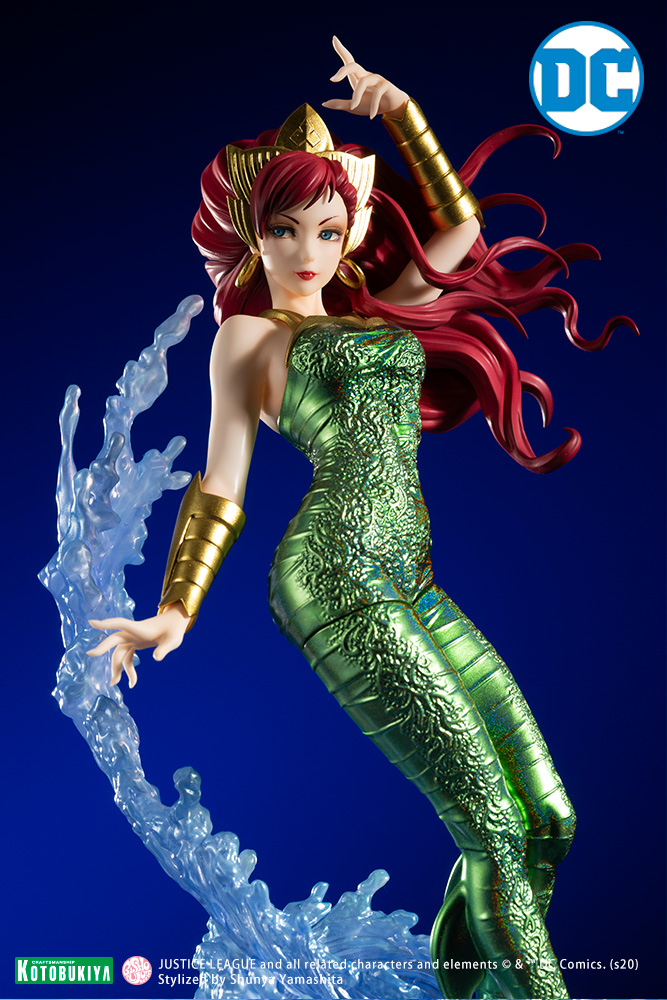 We used a special paint for this statue! 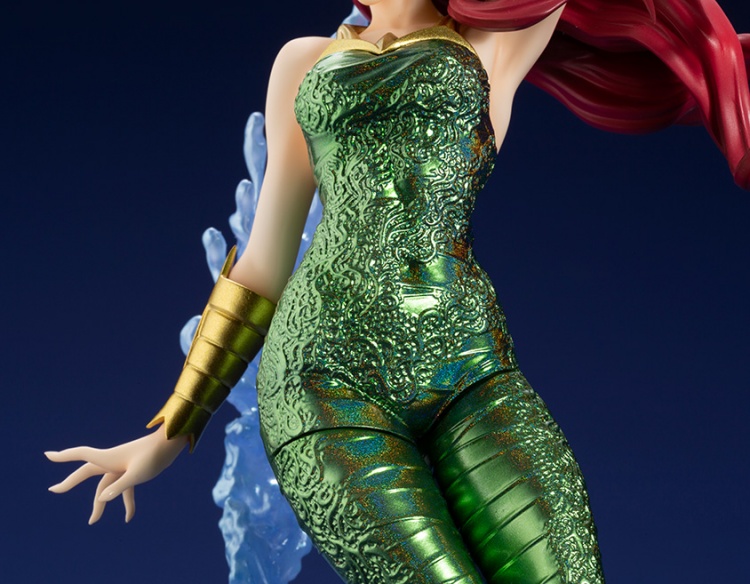 The bodysuit is recreated with a special paint that can be seen in various hues based on the lighting and angle! Looks just like a fish out of water!

To bring to life the scales of an aquatic being, our team of sculptors, product manufacturing staff, and factory staff went through many hours of researching to find the perfect paint for this statue! (I am infinitely grateful for all of their help and dedication…!)

The mold that we used for her suit was made with the image of a seaweed-like lace. We paid extra attention to the details and depth of each lace to look like real fabric. With the shape of the mold, the paint goes into each crevice of the design, giving the suit a rainbow look from any angle. 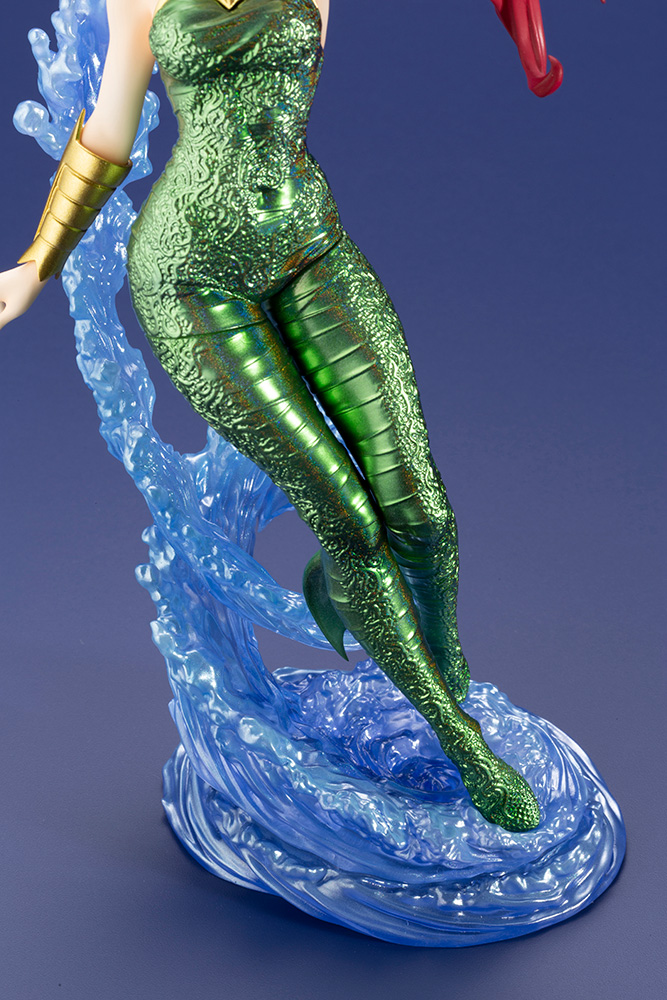 Mera’s Hydrokinetic abilities are shown by the large wave of water swirling around her on the base!

The base is finished with a light layer of pearl paint to add the realistic highlights of waves in the ocean. The beauty of the natural elements in the design and the way the base looks almost translucent at parts really brings this entire statue to life! ♪

Up-Close Detail #3: The Details in the Sculpt

Now this is the part where I get to talk about my favorite part of the sculpting in the statue…! 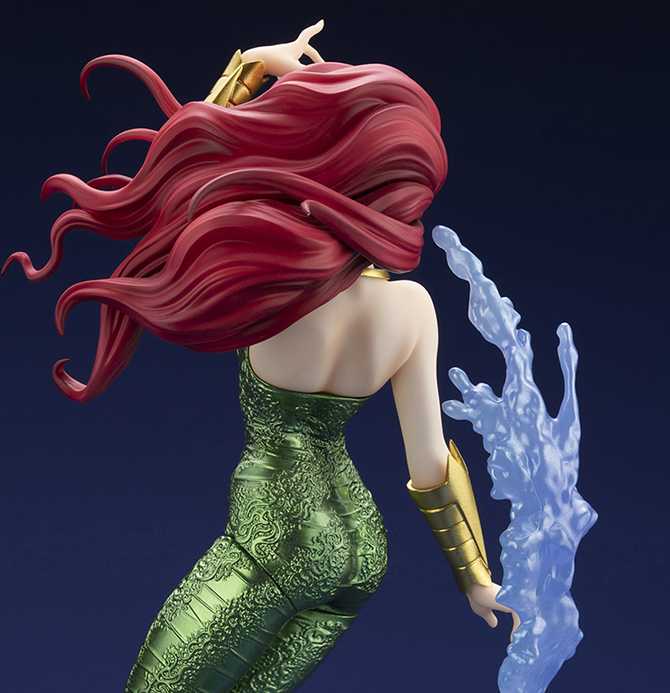 Look at the width of her broad shoulders!

Many professional swimmers tend to have broader shoulders. (They look so cool…!)

Since Mera is a queen associated with the ocean… I wanted to make Mera have slightly broader shoulders than the rest of the BISHOUJO lineup to make her look well-toned and muscular to stay true to her aquatic roots! 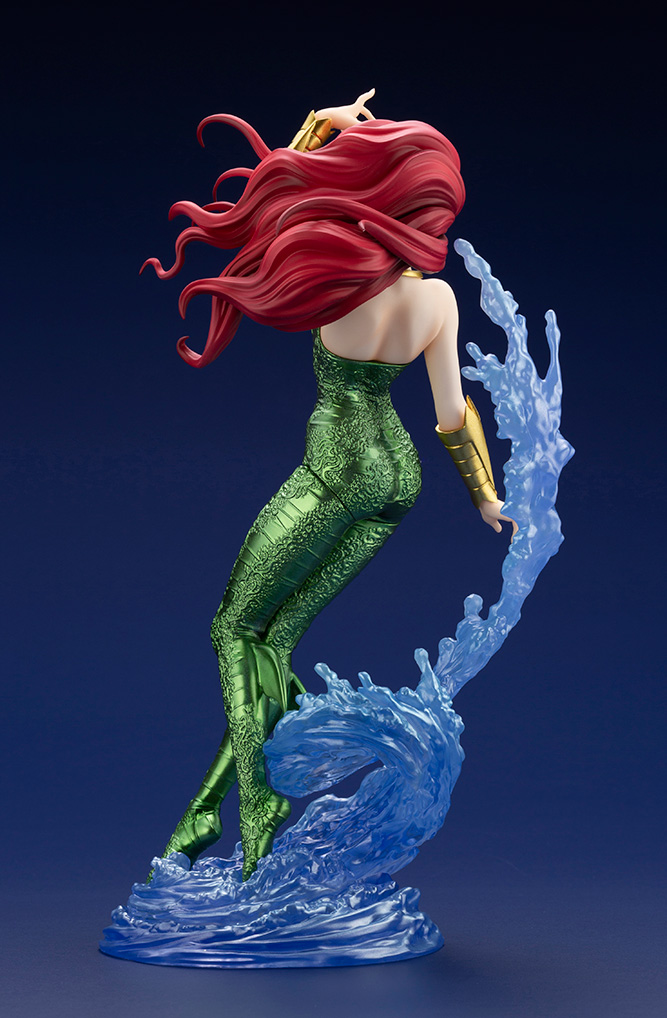 But it isn’t just her shoulders we paid attention to… Her entire silhouette is beautifully replicated as well!

With the expert hands of the sculptor, Munchkin （@YOKKI_munchkin_）, you will be sure to take notice of how life seems to surge in this sculpt to the very end of her fingertips and hair.

(Thank you for the amazing sculpt job, Munchkin-san…!) 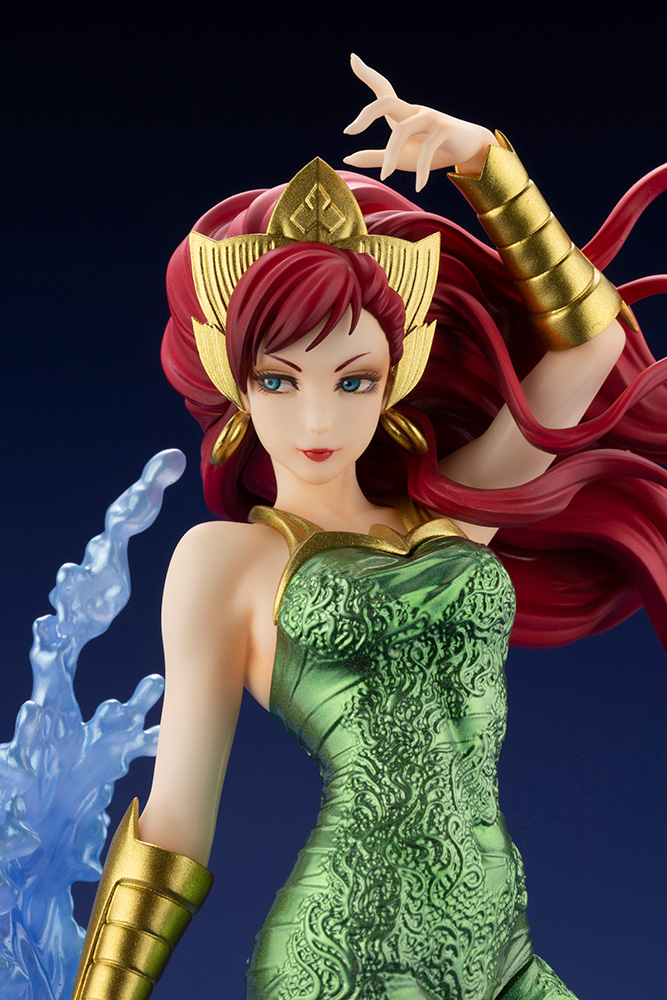 Also, can you see the movement in her earrings?

The earrings have also been sculpted to look as though they are floating in the water.

I also personally love the way the fingers have been sculpted. ♪ 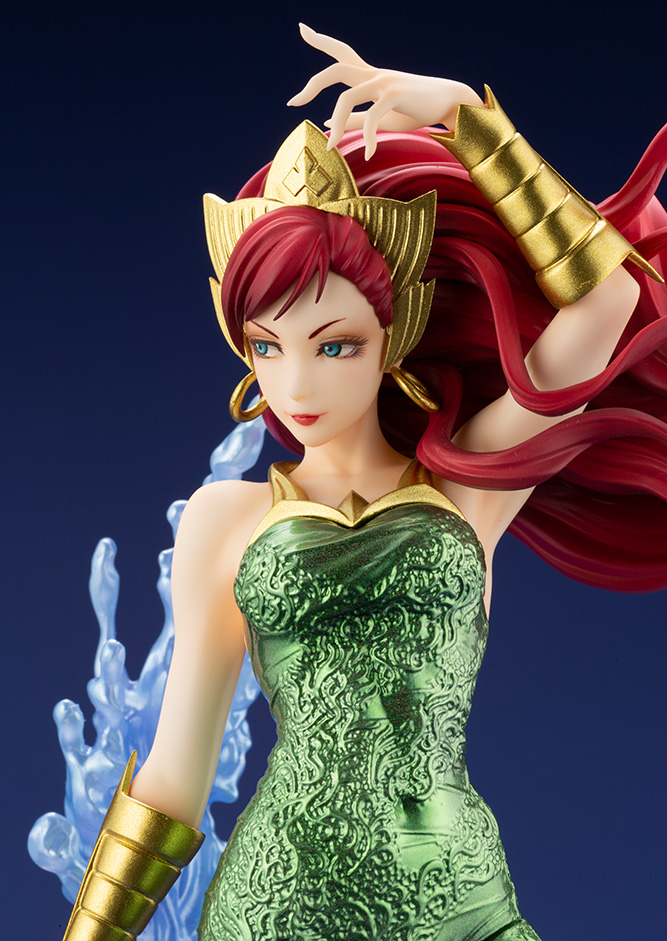 I wanted each of her fingertips to look as though they are also free-flowing; similar to the way the tentacles of a jellyfish can be seen in all angles and directions. 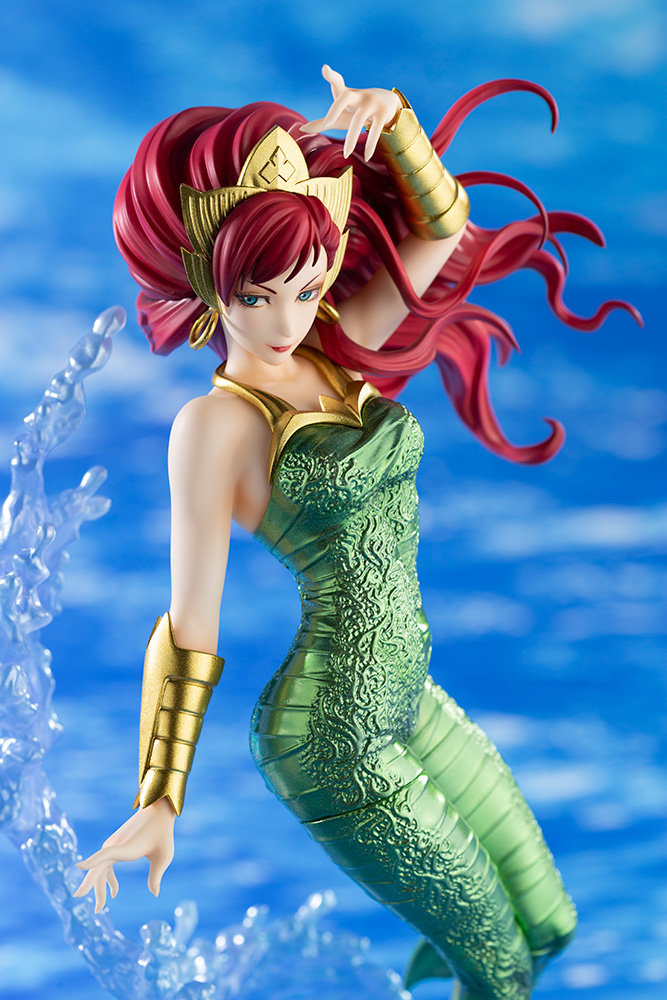 Take a photo with a blue background and Mera will really look as though she came splashing out of the water! 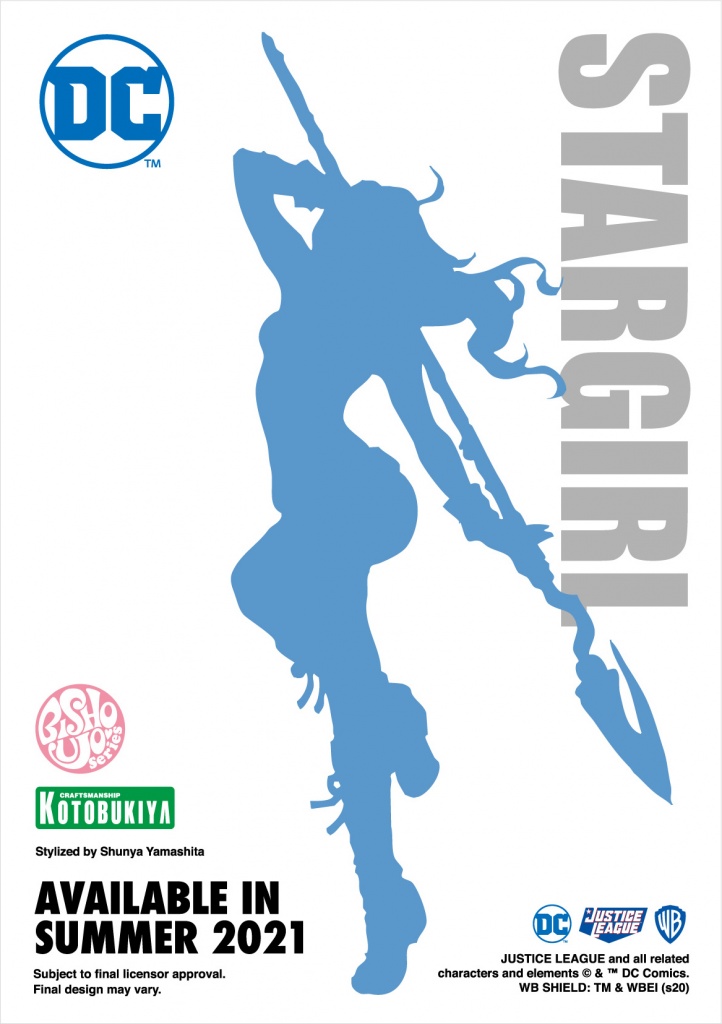 The next character to join the DC COMICS BISHOUJO lineup is Stargirl!