DEAD BY DAYLIGHT THE TRAPPER STATUE About Dead by Daylight

Dead by Daylight is a popular asymmetrical multiplayer horror game developed by Behaviour Interactive and is now available on Steam, PlayStation 4, Nintendo Switch, and other consoles!

Dead by Daylight marks its fourth anniversary this year and is only continuing to grow in popularity each year!

The Dead by Daylight statues are made by me, SHO-GUN（@kikakuguys）, and sculptor MASATO OHATA （@shiyumaimai）. We are both huge fans of the game! We hope to bring you statues that bring to life the characters from the game with our perspective as fans of the work! We hope you will enjoy all of the details and care we put into the statues to come!

To hear a detailed description of the first in the lineup, THE TRAPPER, check out our KOTOBUKIYA SUMMER EXPO stream that went live on August 24th!

*The video is archived on the Kotobukiya TV Youtube channel! For those who missed out: 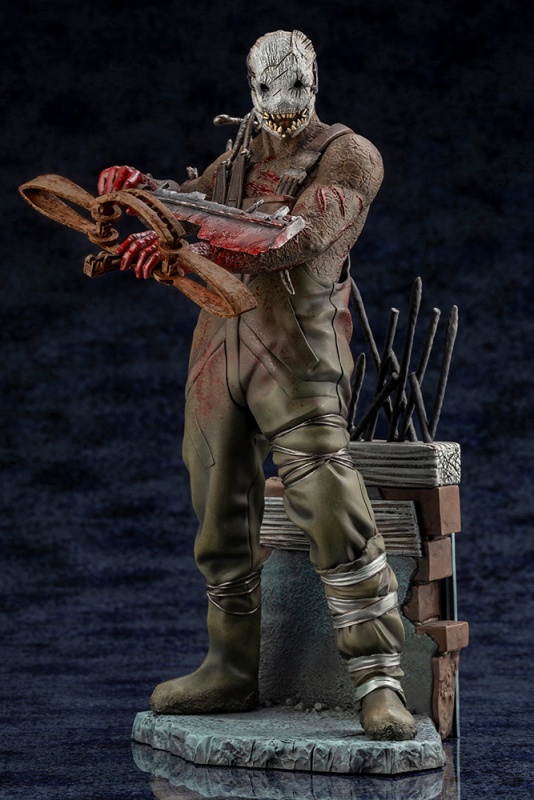 Check out THE TRAPPER with the large Bear Trap in hand, watching your every move…!

You’ve been found, and there is no room for escape! 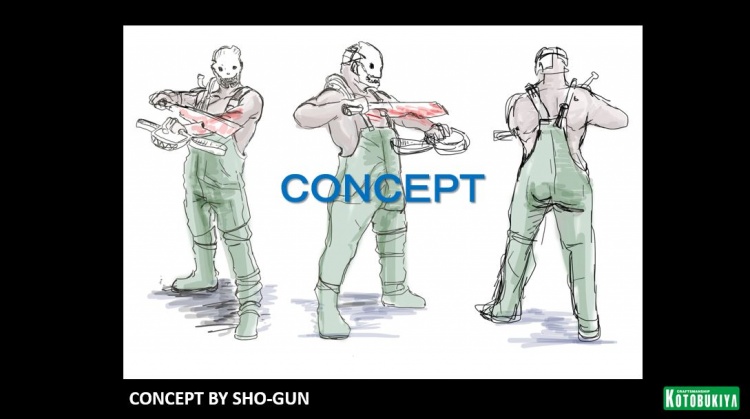 This is the concept art for this statue! We all agreed to this pose fairly early on in the product development phase.

THE TRAPPER can be seen wiping the blood of his victims onto his arm each time he attacks. I loved the way his arms are constantly red from the dried blood. I am sure many fans also associate this particular pose with THE TRAPPER as well! 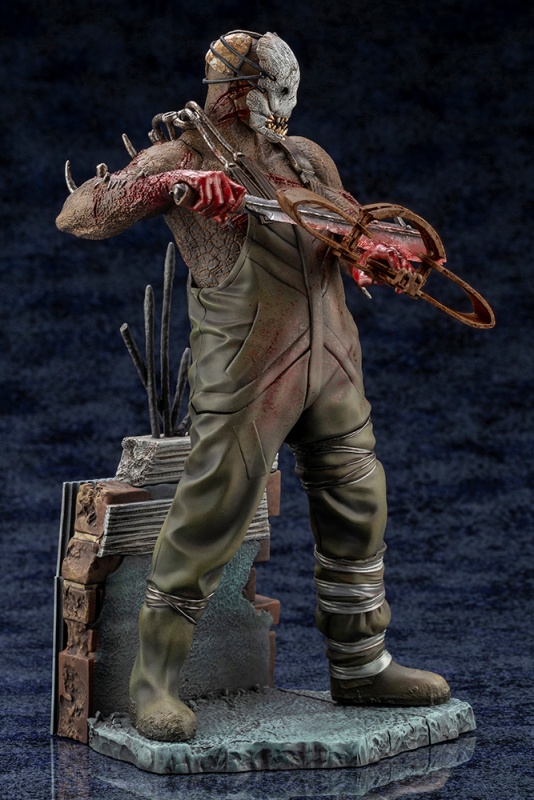 THE TRAPPER looks as though he is standing with at the ready to attack his next target…!

THE TRAPPER is a character with a very sturdy body and has a relatively good posture, so we took care to give him that vibe in each detail of the sculpt. 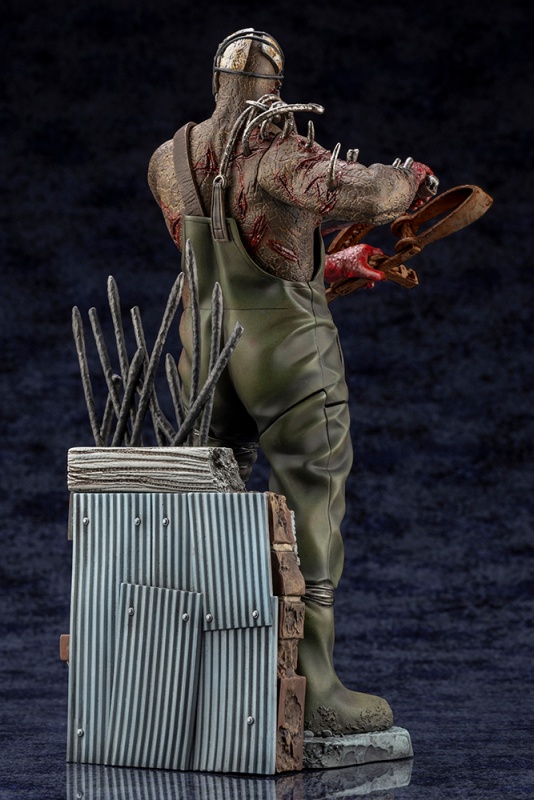 The statue looks so cool from the back…!

You can see that his back and the thick chest is full of muscle. (So awesome…!)

The fat on top of the muscle is like that of a wrestler’s body, and the gap between the skin and the overalls is one of my favorite parts of this statue. Yes, it’s meant to look sexy!

About the Minute Details 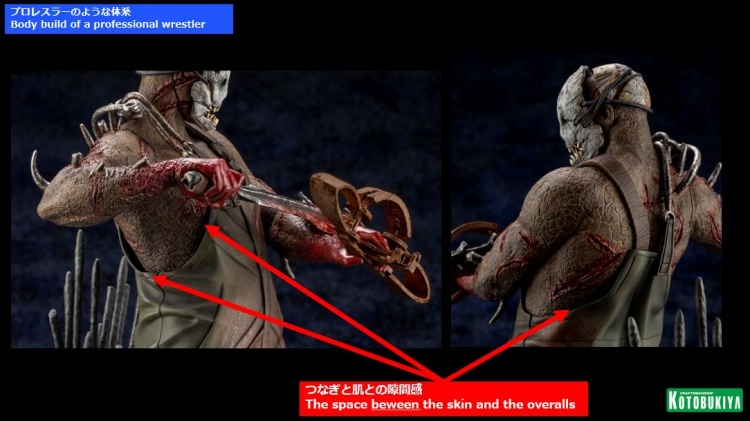 As I briefly touched on earlier, THE TRAPPER has a very distinctive body shape, so we made sure to stay as true to the character in the game as much as possible.

(I’ve been thinking about how best to bring out his physique since the pose concept phase…!) Trapper’s mask is faithfully recreated by using the modeling data of the character provided directly from the licensor, Behaviour Interactive! 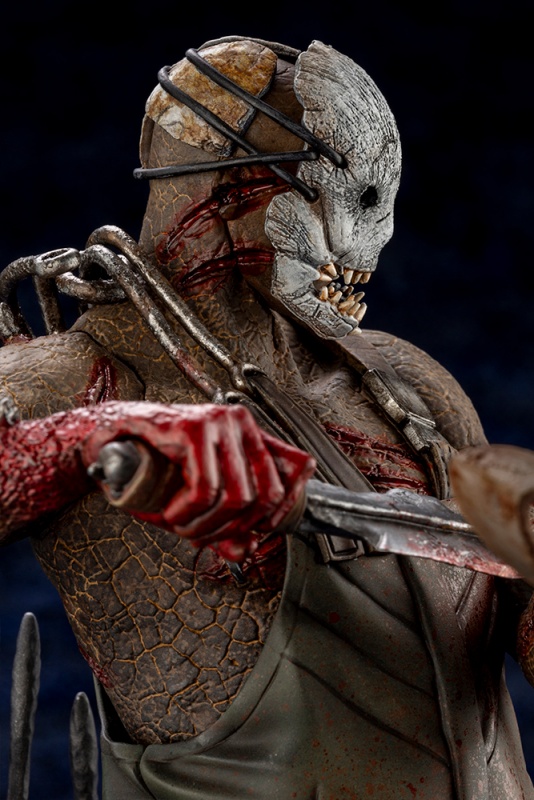 If you look at the statue from this angle, THE TRAPPER’s silhouette is reminiscent of the Dead by Daylight videogame package art.

The ears, which were torn off by The Entity, is also perfectly reproduced in this rendition of THE TRAPPER.

Also, check out the small gap between the collarbone and the shoulder straps…! 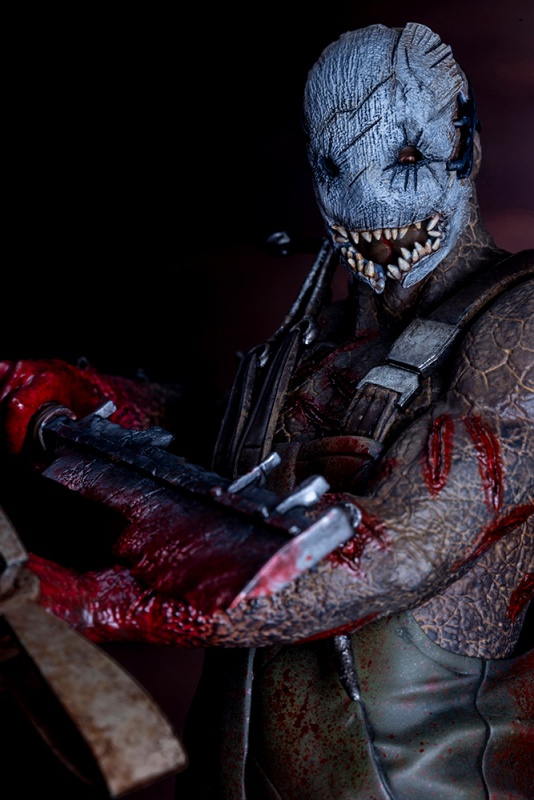 I can’t get enough of this mysterious look of THE TRAPPER’s face…! 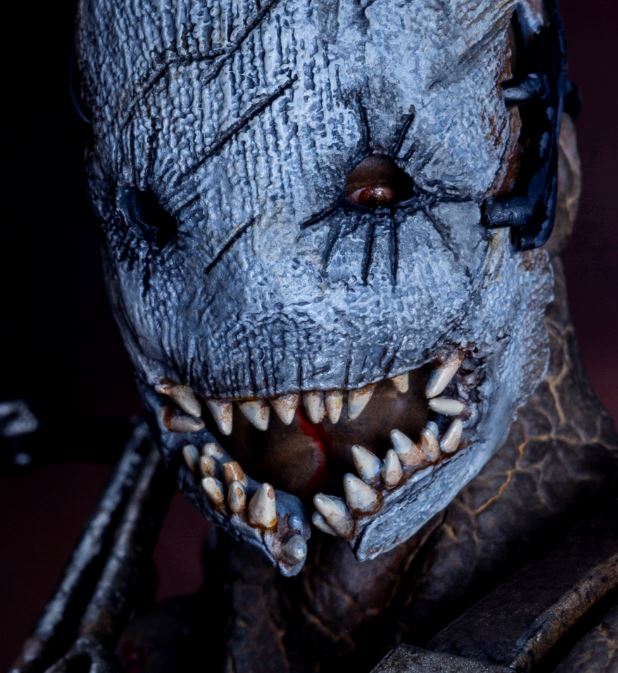 Can you see the details peeking out from behind the mask?

We replicated the features of THE TRAPPER’s even underneath the mask! You can get a glimpse of his eyes under the right lighting and angle.

*The mask cannot be removed from the statue. But we still made his face hyper-realistic anyways! 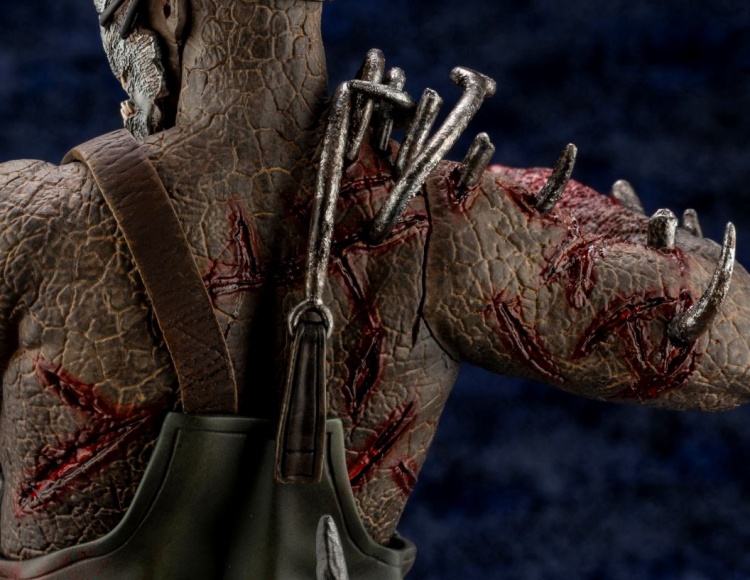 From the texture of the skin, which looks dry and cracked, down to the torture scars left by The Entity…

Every detail in this statue (the sculpting and paint application) add an important element to represent the character of THE TRAPPER.

Each cut and scar on THE TRAPPER’s body vary in size, depth, and shape to truly bring this killer to life. The blood surrounding each cut has also been painted with a few types of paint to ensure that the wetness of fresh blood and dry look of older blood can be easily differentiated at first look.

The leather shoulder straps on the overalls almost look as though it has been made with real leather! Get your hands on this special statue so you can take a closer look at every detail! 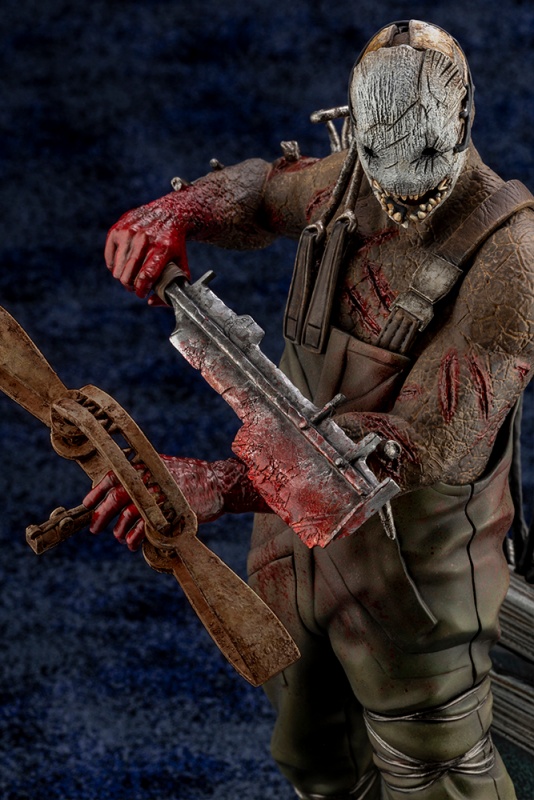 The cleaver, too, has been painted with multiple layers of clear red paint to create a unique hue of red.

The slimy blood on the tips of his fingers look dried up towards the top of my arms, adding a gradient of textures!

You can enjoy various painting methods just with this one product. 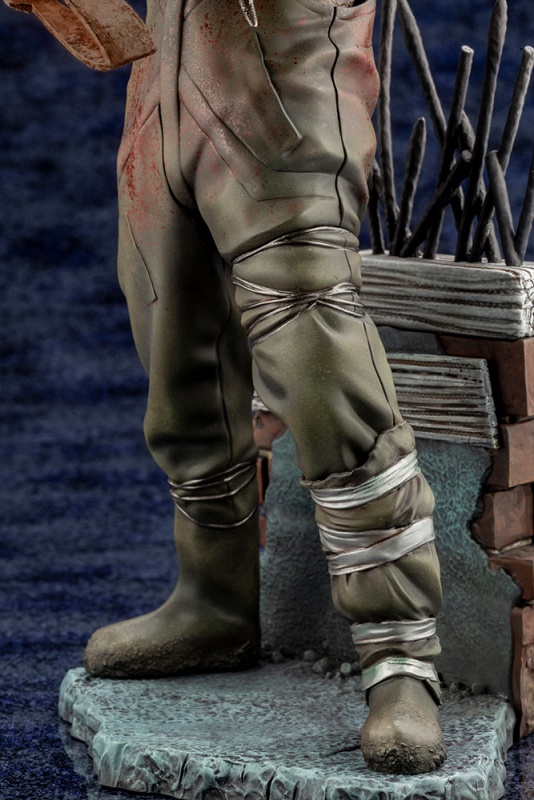 If you look at his legs, you can see even more details that we worked on!

The way the wire and duct tape look tight and messy gives off the impression that each component was forced onto his body. The wrinkles in the garment of clothing add a nice accent to the overall design.

The duct tape has been recreated with metallic paint to give it a more realistic and overwhelming presence! 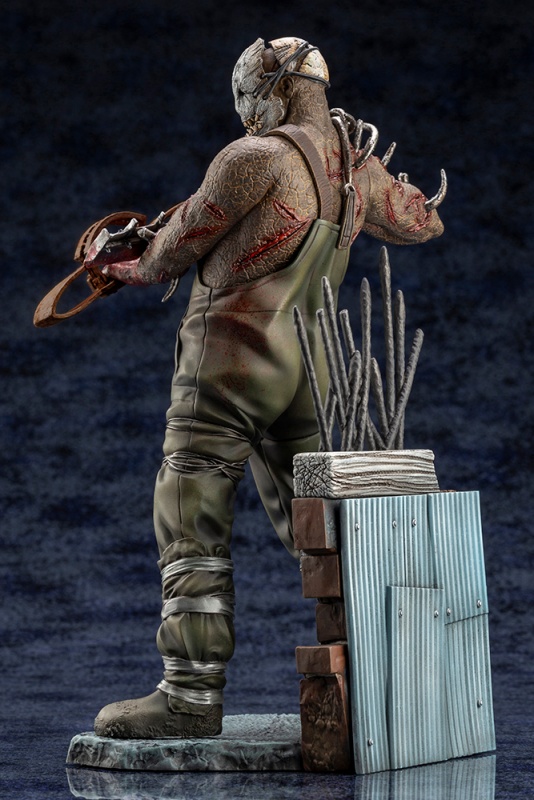 For those who watched our KOTOBUKIYA SUMMER EXPO livestream, I’m sure you all remember us talking about how difficult it was to create the base for this statue.

The base is based on The Trapper’s stage, “MacMillan Estate”, in the game. This stage is illuminated by the blueish color of the moonlight, so we added a light brushing of blue paint on top to bring this to life. 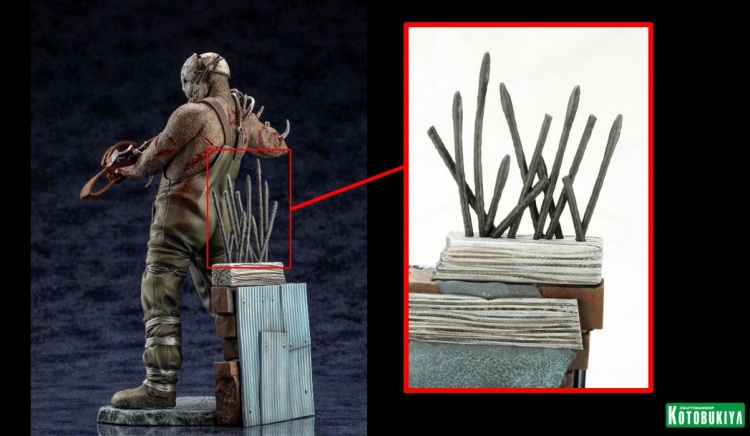 Also, check out the appearance of The Entity as it blocks the windowsill!

Don’t you just want to lay a Bear Trap on the ground by the window?

This statue’s base gives off a playful feel which makes you wonder, ‘was there an intense chase going on before I arrived?’ This statue will be sure to trigger your imagination. 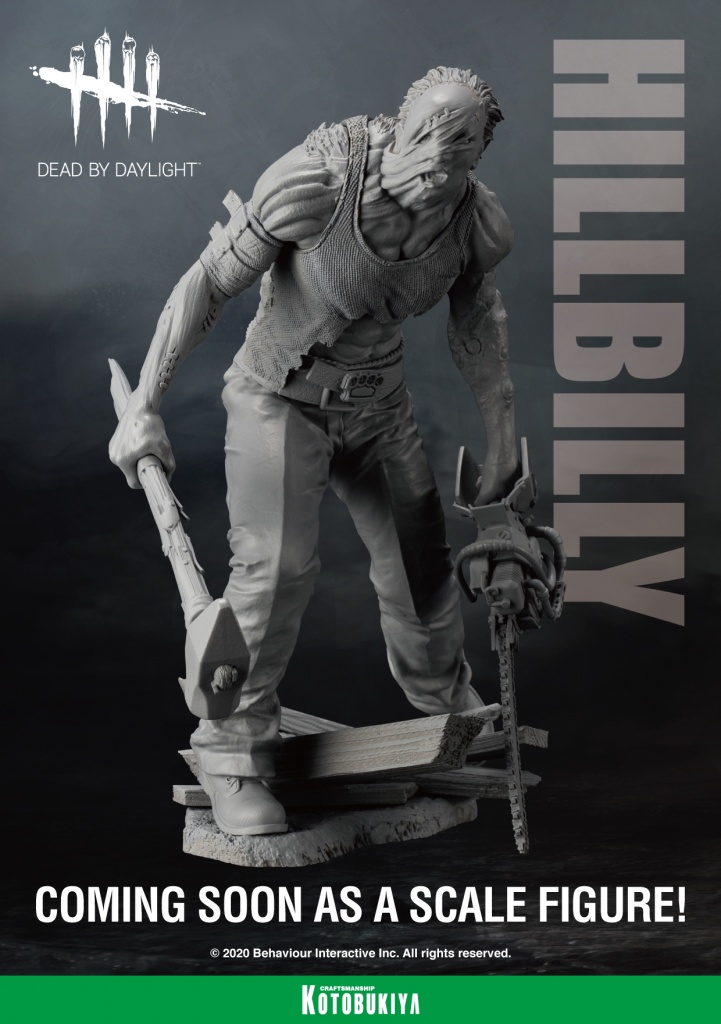 The Hillbilly is now in the works!

You can soon enjoy The Hillbilly as he trudges towards you, dragging one leg behind him.

We worked hard to bring to life the way the killer limps forward. Be sure to keep an eye out for more details to come! 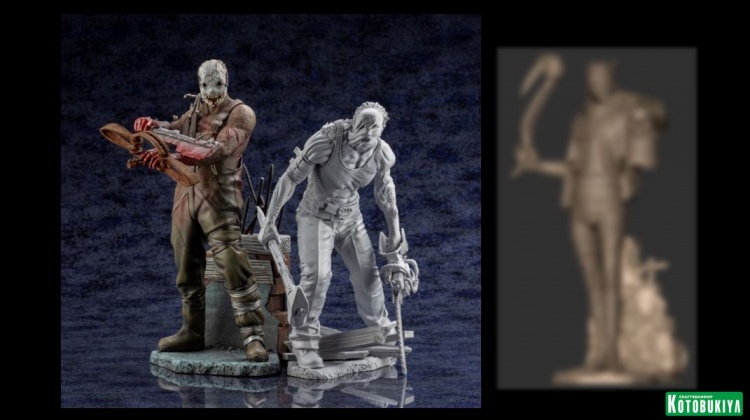 The third statue to join the Dead by Daylight statue lineup is The Wraith!

Do you hear the sound of the dreaded bells? The Wraith has appeared and is now coming after you!

Wraith’s silhouette resembles a tall and sleek silhouette; a huge contrast to the other two killers that will be joining the statue lineup.

All three statues are designed to look perfectly balanced when displayed side by side, and each character’s individuality truly shines through. Be sure to preorder each statue and collect them all! 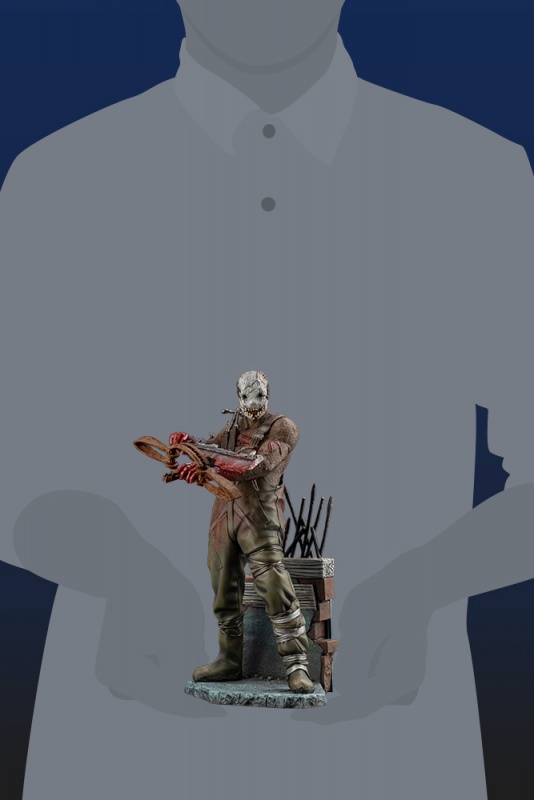 Check out the above image to get a glimpse of the scale of this statue! The statue will be approximately 25cm tall but does not lack in any volume!

This statue has been made to be similar in scale and size to that of a BISHOUJO STATUE!

Wait, did somebody say BISHOUJO STATUE…?

Be sure to pre-order DEAD BY DAYLIGHT THE TRAPPER STATUE while available!

The future of the Kotobukiya’s Dead by Daylight line is in your hands! 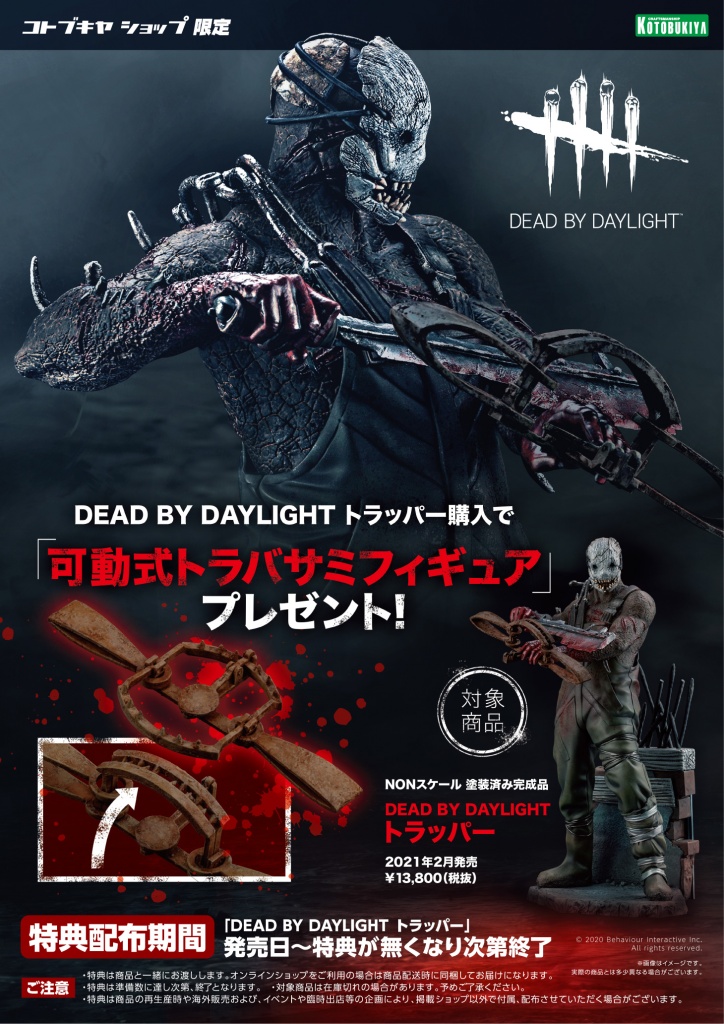 The Action Bear Trap Bonus Part shown in the images above are only available as a pre-order bonus through select retailers worldwide.

As the name of the bonus part insinuates, this miniature Bear Trap can actually be articulated open or closed! (It might be fun to use with other statues too!)

Why not lay the Bear Trap on the ground to reenact a Daily Ritual?