Black Cat Returns to the BISHOUJO Series for the First Time in 9 Years! Black Cat, the daughter of the world-renowned cat burglar, began to train with various fighting styles to get revenge after suffering from one particular incident. Sometimes an enemy, a friend, and at times a woman in love… She is a heroine that portrays the essence of both good and evil!

She was also a crime boss in the past and an adventurer in the past. She’s a character full of identities and faces, but this time we’re going to focus on the “thief!” ♪ 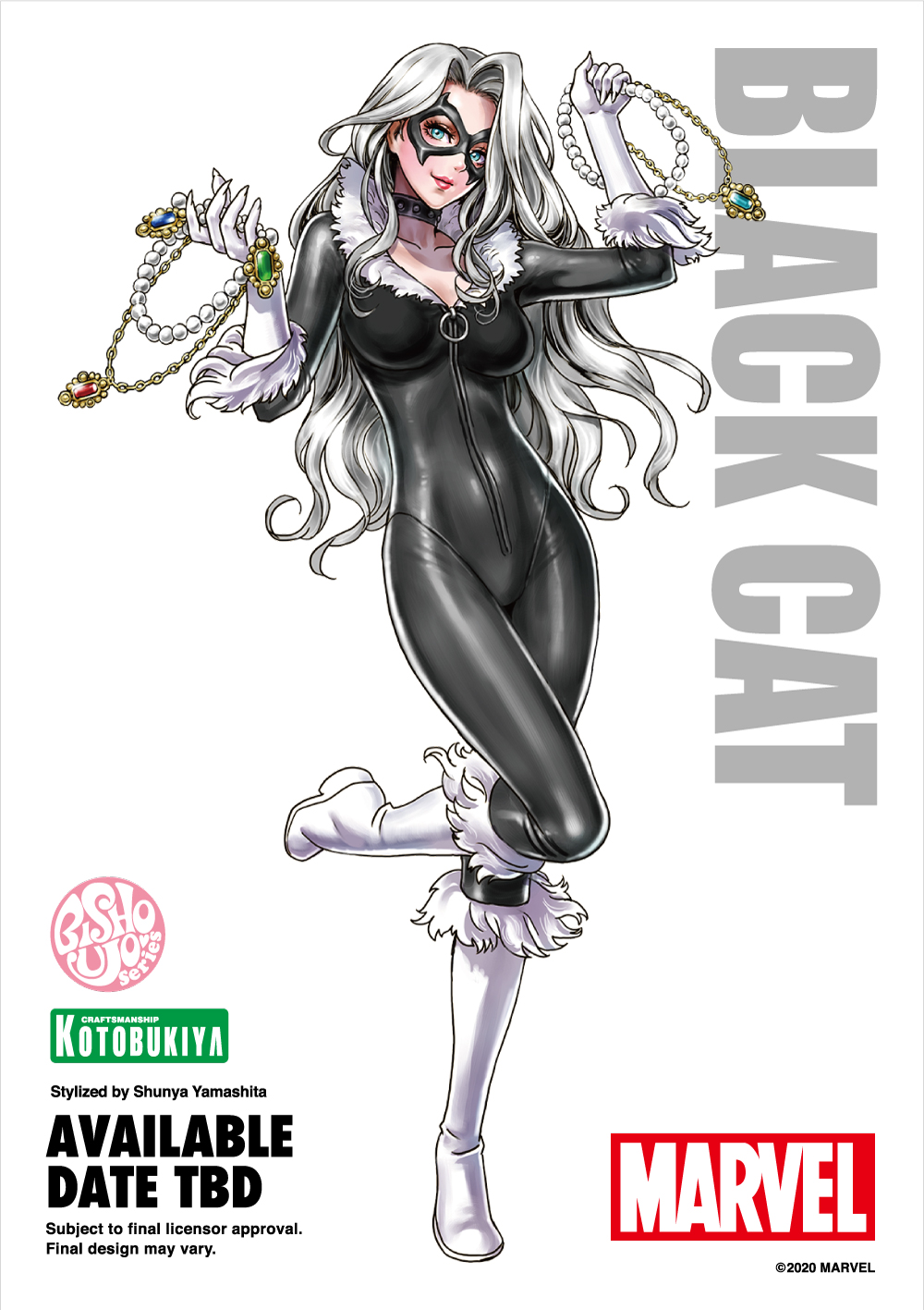 Black Cat is reborn in a brand new illustration stylized by the beloved Shunya Yamashita （@ShunyaYamashita）and brought to life in stunning detail thanks to the craftsmanship of sculptor ke (comaccow)!

She can be seen beaming with a plethora of shiny jewels in hand, exhilarated by the success of her mission.

This is actually the second time Black Cat has been BISHOUJO-fied! The original Black Cat BISHOUJO was a challenging statue to make, with the vignette-style base and the eyes being partially printed on rather than painted.

This Black Cat BISHOUJO is now a premium item and is quite rare to come across, even among collectors of the BISHOUJO series! ♪

To ensure that fans who own the original Black Cat BISHOUJO will still enjoy this new rendition of the character, we decided to include the following qualities to this new BISHOUJO:

Now, let’s get into how we added the above features into this statue! ♪ This new BISHOUJO stands “taller” than the previous statue.

The way Black Cat can be seen landing on one foot is similar to the original Black Cat BISHOUJO, yet the statue looks quite different, doesn’t it?

We’ve also tried to make the height of the character a little taller than before, to stay truer to the original character design.

The curls/waves in the hair and the sculpt of the fur are a beautiful contrast to the simple suit design. Albeit the simple pose, the counterpoise (shoulders, arms, hips, and the overall axis of the body against one leg where the weight is applied) adds an artistic and realistic touch to the dynamic pose.

The delicate expression of curled, voluminous hair swaying behind the body is also a must-see. The shades and colors on each visible part of the statue are elevated by the layers of paint and materials used.

This statue does not use the same white color for all parts considered “white.” Just by looking at the photo above, you can see that various paint and sculpting techniques have been utilized to express the various textures of each component in the statue.

Up-Close Detail #3: The Base Look at the base featuring large jewels!

The base was not shown in the original illustration, but it was actually planned out from the start of the project! The angle and balance of the statue have been adjusted many times throughout the sculpting stage to make sure the statue is structurally stable.

In addition, the base is also painted over with an iridescent coating to further accentuate the shimmer in the paint. The iridescent coating was previously used for MARVEL COMICS WASP BISHOUJO STATUE and adds an exquisite touch to the paint with the way it reflects light.

The sparkles look even brighter and shinier on uneven surfaces like Wasp’s wings, but please look forward to seeing the end result for yourself! The three gems that support the most strikingly large jewel are “red”, “green,” and “blue”… the same as the jewels on the necklace she can be seen holding in her hands.

The choice to use ruby (red) and sapphire (blue) as part of the design is actually to add a hint of Spider-Man’s signature colors to the design!

The sculptor, ke (comaccow), brought every part of the original design to life; creating this statue into a work of art!

Black Cat Steals Your Heart BISHOUJO Statue is a must for any collector!

Be sure to admire every detail up close!

Add this all-new BISHOUJO statue to your very own collection! ☆Pre-order before it’s too late!☆