The next in the lineup for The Texas Chainsaw Massacre BISHOUJO series is here! 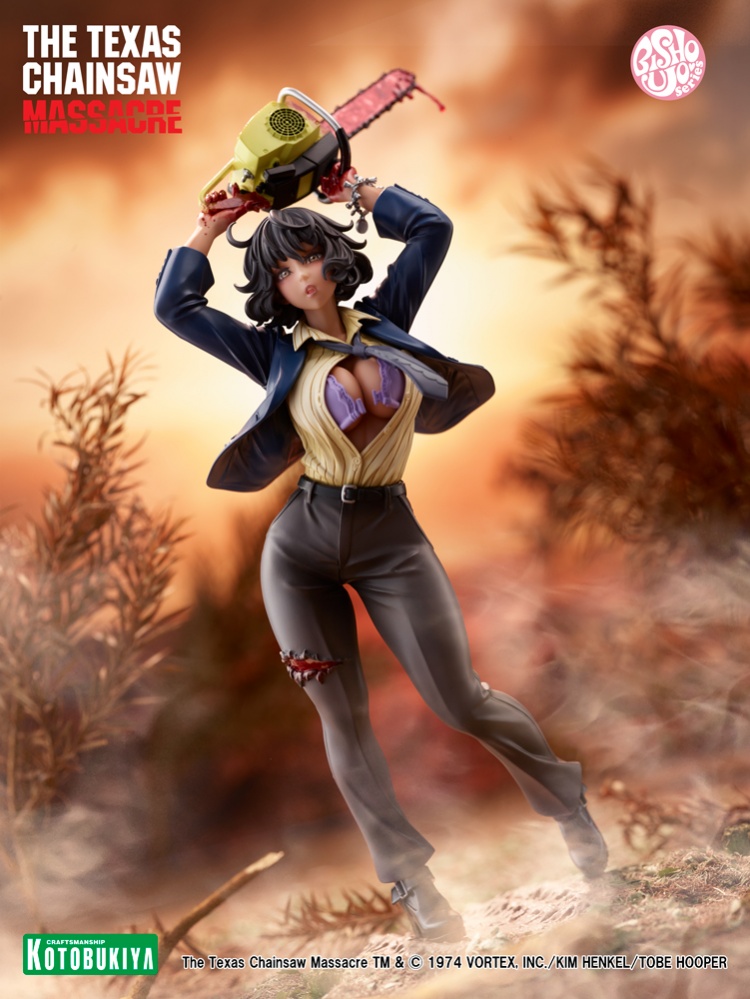 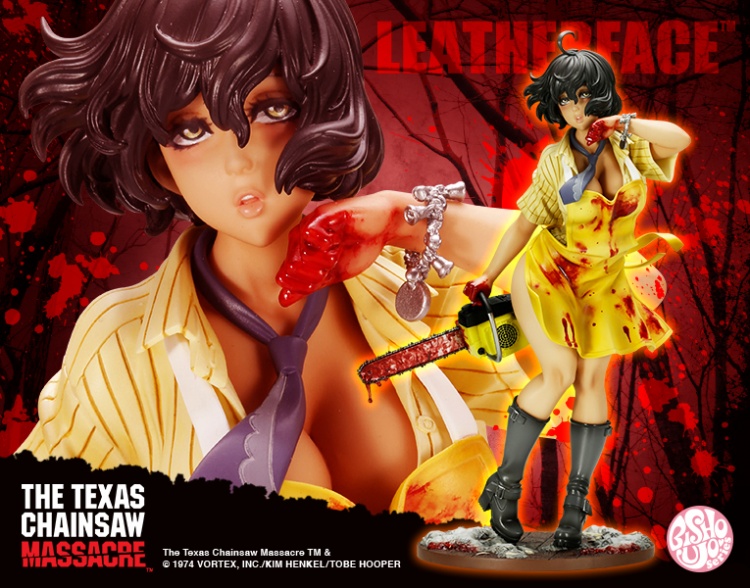 The picture above showcases Leatherface in a yellow apron, the first BISHOUJO rendition to come from The Texas Chainsaw Massacre.

To learn more about the first Leatherface BISHOUJO, read our previous blog here! If you know Japanese, check out the blog on Mamegyorai to learn more! ♪ 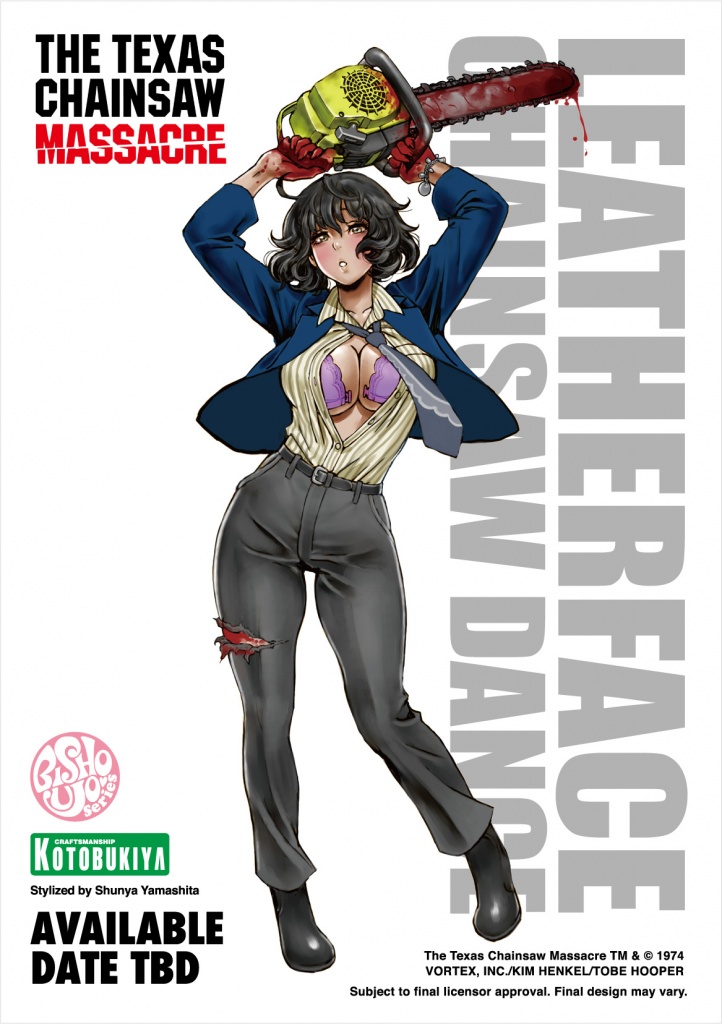 The illustration for both Leatherface versions were drawn by Shunya Yamashita （@ShunyaYamashita). The second rendition of Leatherface showcases the character in the infamous “Chainsaw Dance” scene from the film!

This particular rendition is one of the sexiest BISHOUJO statues we have made to date (surprisingly, by request of the licensor)!

As is the motto we go by in the BISHOUJO series, this statue and illustration was designed to be “meaningful and sexy.”

When I first received the rough illustration of both versions of Leatherface from Shunya Yamashita, I practically wrote an entire essay about what I love in each illustration! I look back at the essay time and time again to help replicate my initial feelings of “love” I felt from the illustrations, and make sure to keep those feelings intact in the sculpting and painting phase. 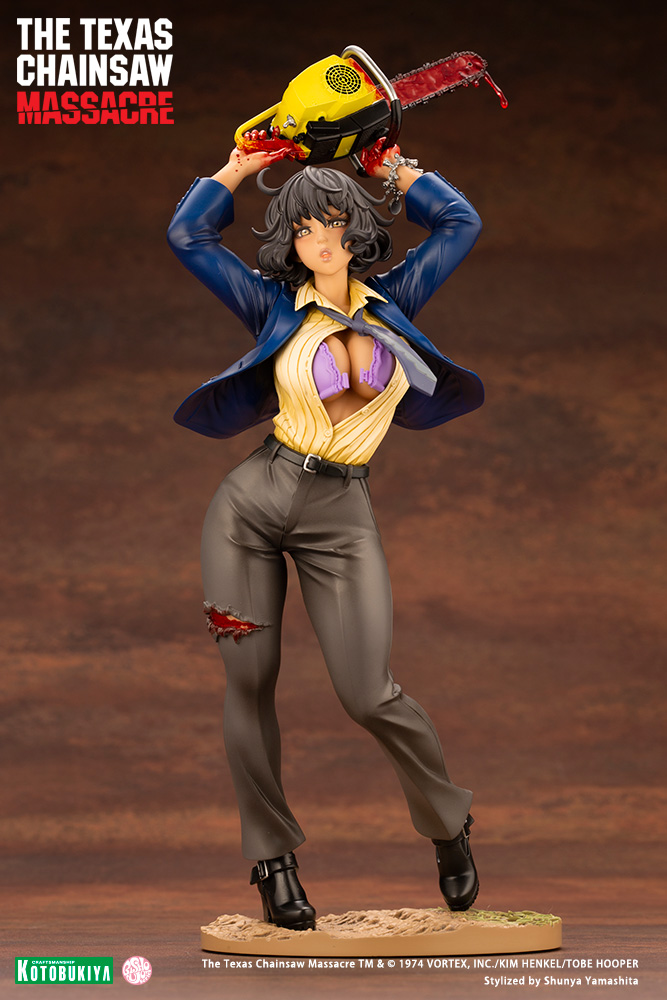 That scene where Leatherface can be seen chasing after victims in “formal attire.”

We used the memorable “Chainsaw Dance” scene as a motif, where Leatherface can be seen swinging a chainsaw about.

For those who are a stickler for manners and think, “it’s not a true rendition of the formal attire without the ‘Pretty Woman Mask’!” Fear not! 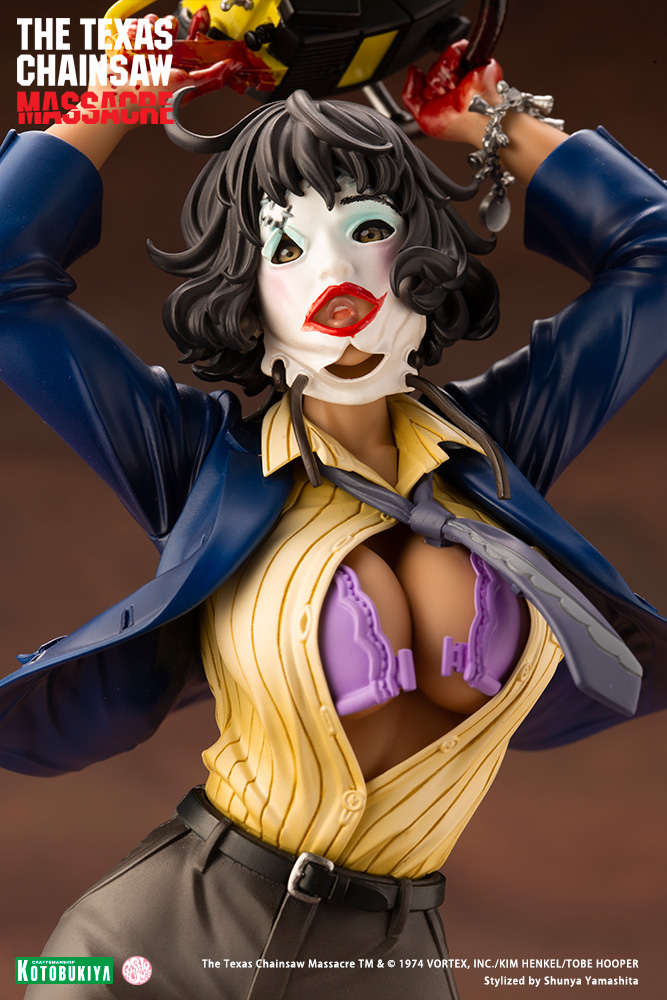 This statue comes with a “Pretty Woman Mask” face part in the packaging, so Leatherface can be fully dressed up!

The “Pretty Woman Mask” perfectly resembles the mask shown in the film; from the hole where the chin peeks out, to the “caked up” face decorated with eyeshadow and blush. Because this Leatherface is dressed up in formal attire, of course, the necktie is fully tied and tucked underneath the collar of the shirt! The shirt is not fully buttoned, so some may say this is not “formal attire,” but compare this design to the first Leatherface!

The yellow apron Leatherface is sculpted wearing the necktie right around the neck rather than underneath the shirt’s collar! See, it is “formal attire!”

Can you feel the love and passion I have for this design yet…? Then onto my next favorite point! 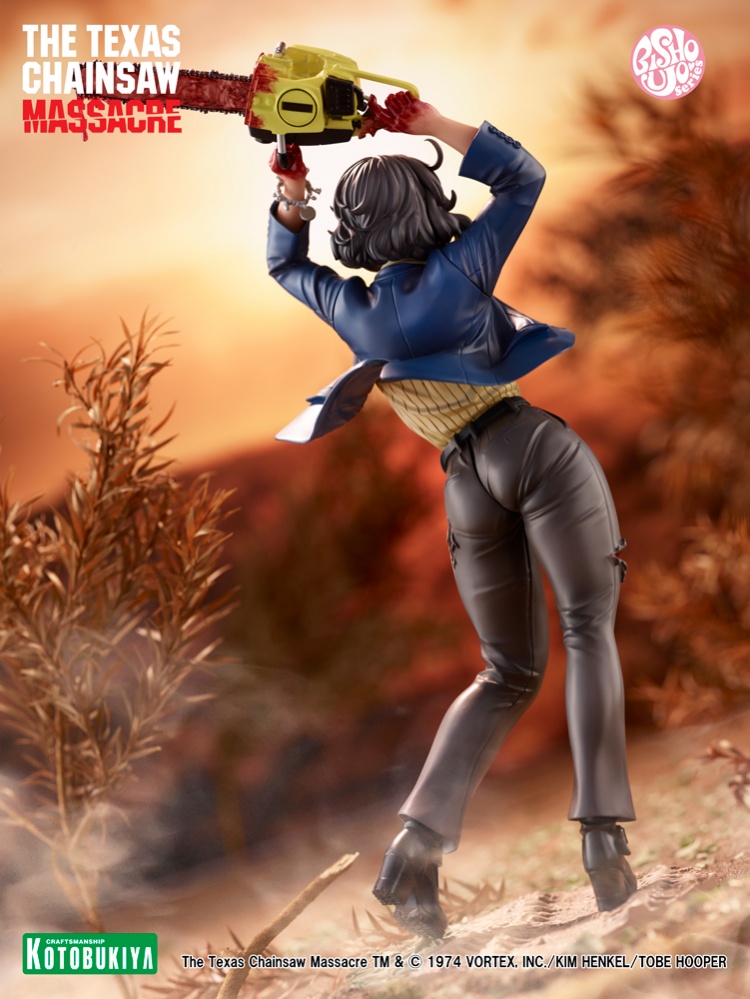 Look at the dress pants full of wrinkles and the outline of the body that can be seen through the clothing. It practically screams “these pair of pants are way too tight!”

The realistic sculpt of the jacket fluttering in the wind can also not to be missed.

We paid close attention to sculpting realistic wrinkles in each surface area the jacket touches the body: from the way the jacket’s shoulder extends down to the shoulder blades, to the way the tight fabric can be seen outstretched around the arms and armpit area! 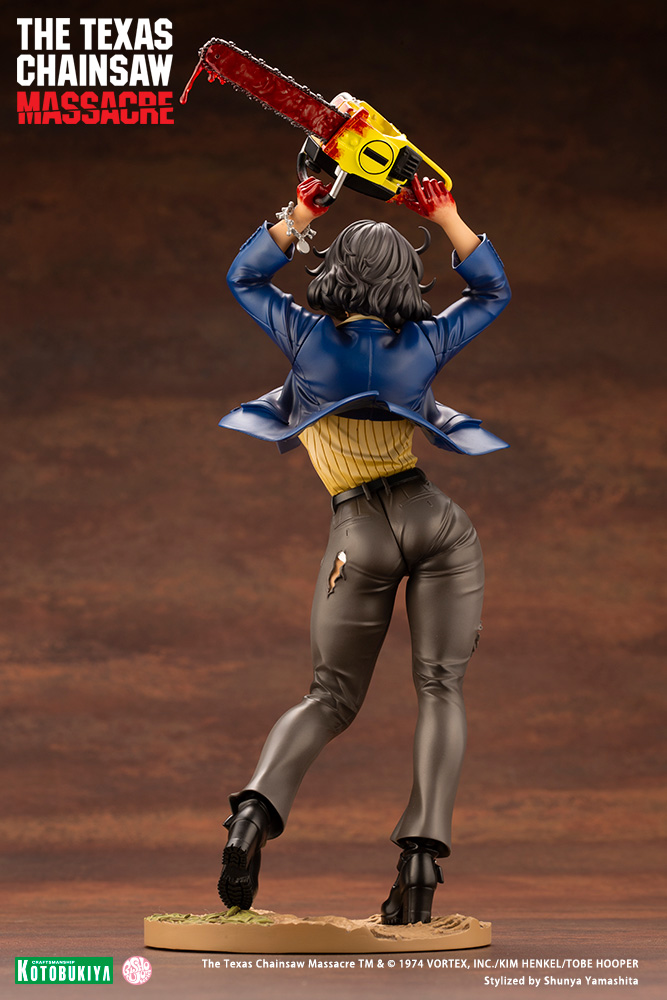 Also, don’t miss out on the small tear on the back of the pants where you can see a hint of panty!

There is actually a tear in the pants at this exact same spot in the film, so be sure to compare this statue with the film! 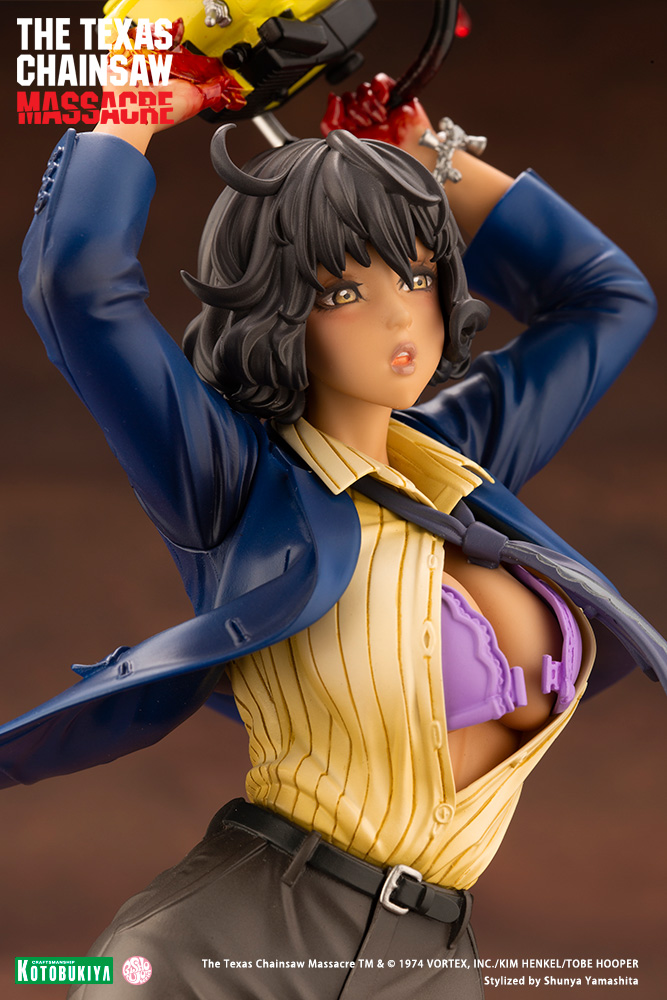 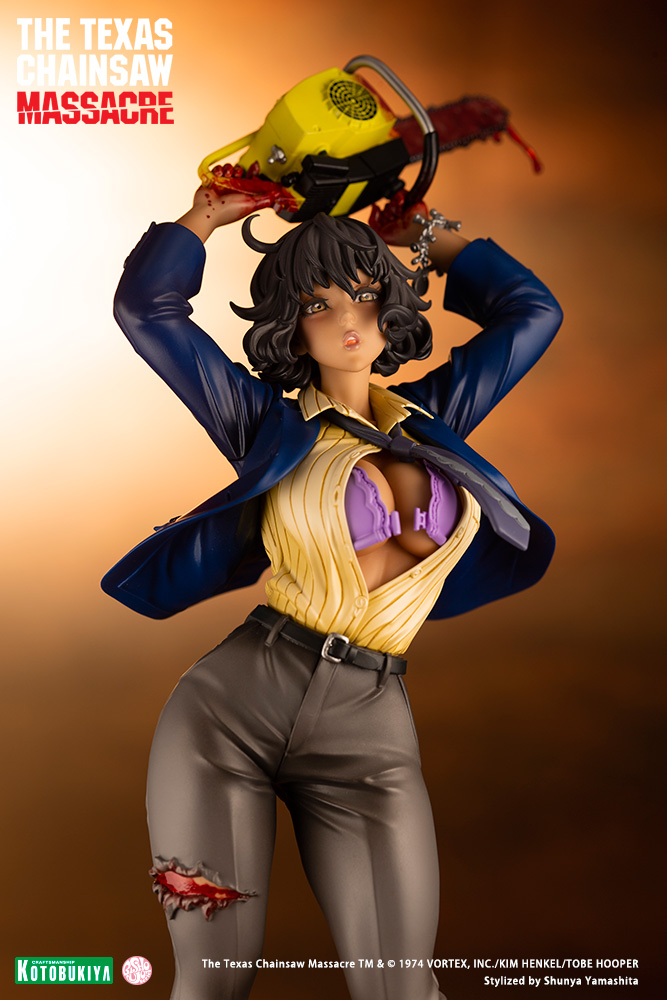 But just by changing the lighting, her facial expression shows that she has lost all sense of control; much like Leatherface’s appearance in the movie.

Playing around with lighting is something that only those who get their hands on this statue will be able to do! 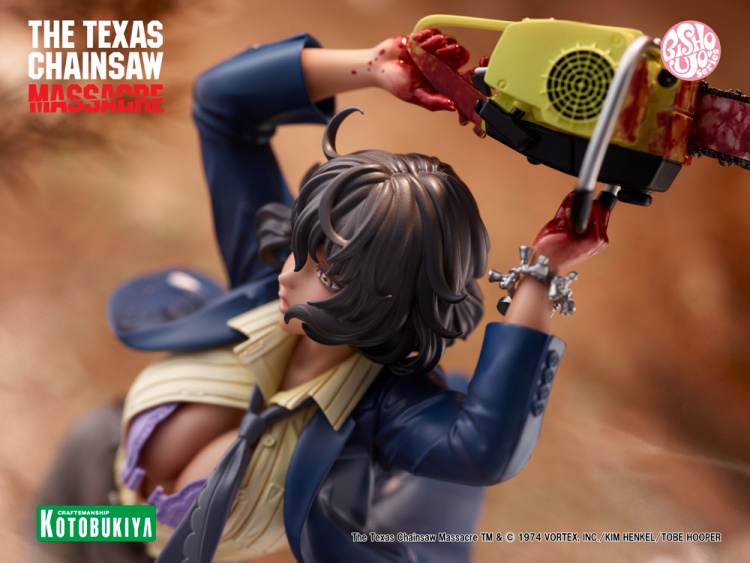 The true-to-original chainsaw and bracelet which are depicted on the first Leatherface statue are also shown in this rendition of Leatherface as well! 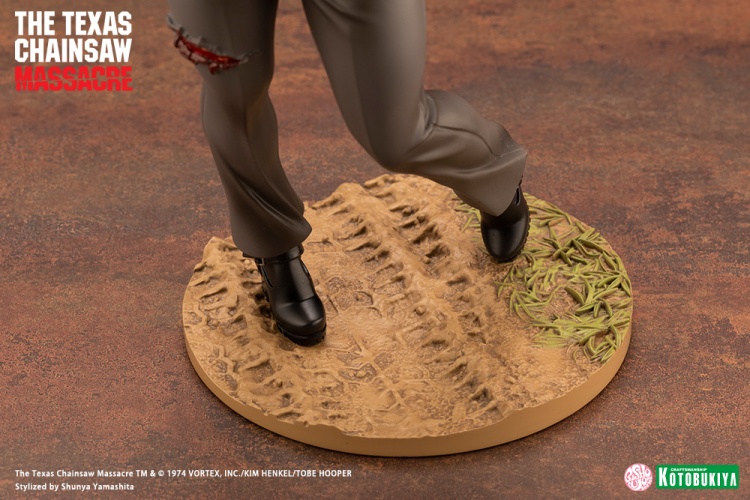 The climax of the film is full of twists and turns which keep fans on their toes to the very end!

This statue comes with a base that exemplifies the vast Texas roads covered in large tire tracks and dry shrubs of grass, bringing fans straight to the scene the climax of the film takes place. 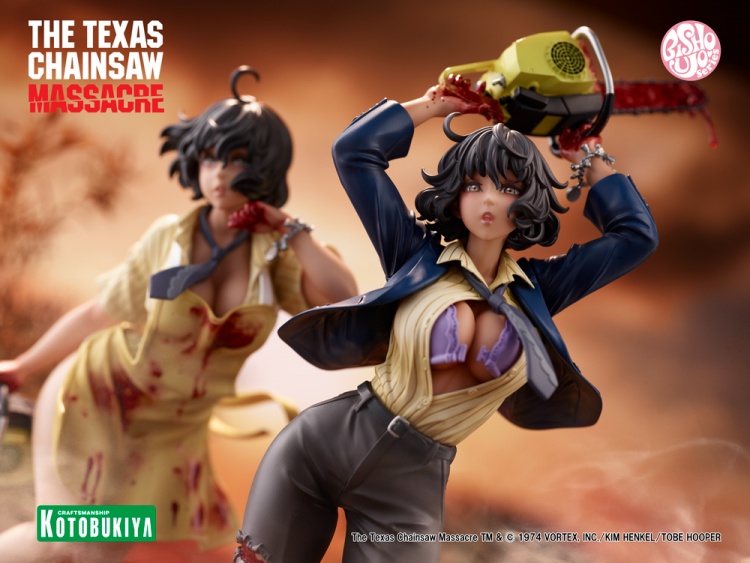 You can line up the statues like so, and enjoy the cute (?) girls chasing after you! 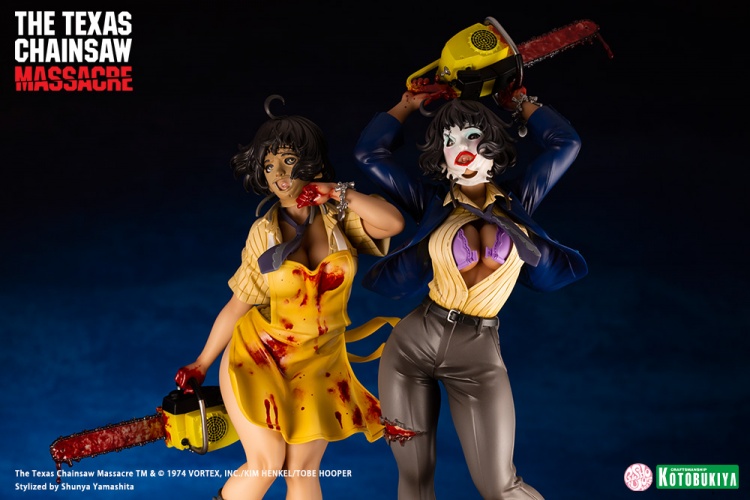 Or line the two versions of Leatherface like so, and enjoy these horrific beings chasing after your flesh!

This is a unique product never before seen in other The Texas Chainsaw Massacre merchandise!

Be sure to add them both to your collection!